The Alphorn
in Folklore

The archaeological record of the Alphorn stretches back nearly two thousand years. Throughout history the Alphorn has been sounded by that most lonely figure of the Swiss countryside; the young shepherd boy, surrounded by his flock of sheep. 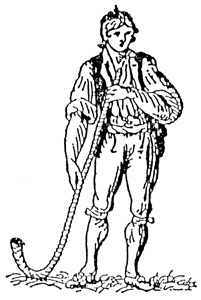 His horn began as a pine tree, bent at its base by the forces of wind, slope and the weight of winter snows. The tree was cut to the Alphorn's traditional "length of two men", split into halves and carved to shape by the boy, a labour of the entire summer. The halves were glued together and wound with strips of bark and hemp twine. There was only one thing left to do. On the bell of his horn he painted, with his mother's help, a garland of his favourite alpine flowers. On this Autumn evening he would blow his Alphorn. Perhaps his father would be listening.....

The traditional time to sound the Alphorn is sunset, which must have been the most anxious time of the day for our shepherd boy; so far from his family hearth with the chill of night in the air. The settling effect of the sound of the Alphorn on the flock, and on the heart of our shepherd boy can be heard in the melancholy beauty of the shepherds' melodies, passed down through the long centuries, from shepherd father to shepherd son.

Back to "Echoes" Compact Disc

An excellent introduction to Alphorn history by Dr. Brigitte Bachmann-Geiser can be found at the following link: The Alphorn in Switzerland.